I wasn’t really sure how to type Rose, even after watching The Last Jedi three times. I knew she was an Introvert and possibly a Feeling type, but I didn’t settle on ISFJ until after reading Cobalt Squadron, which takes place immediately before TLJ.

I’m so glad that Rose appears in a novel as well as in the latest Star Wars film. For one thing I really like the character. And for another it’s much easier to type someone when you have more information about what’s going on inside their minds and the books are good at giving us that.

In the film, our first introduction to Rose is her conversation with Finn. She says, “I work behind pipes all day. Doing talking with Resistance heroes is not my forte.” Then we have this lovely bit of introspection where she realizes what she just said. “Doing … doing talking.” What introverted fan can’t relate to that?

Even though she’s clearly an introvert who’s comfortable in her own inner world, we quickly get to see Rose’s extroverted side. Every introverted type has an extroverted co-pilot process and often times this is the most visible side to their personality when we’re watching a film. For Rose, this part of her personality involves being in-tune with other people.

When we’re inside her head for the Cobalt Squadron book, we find out that she spends quite a bit of time adjusting herself to the expectations of the people around her (aligning herself with her sister Paige, changing the way she talks based on who she’s talking to). And in The Last Jedi the first thing she notices when she meets Finn is that he’s a resistance hero, not that he’s stealing an escape pod. She sees the person before the situation. And her first reaction to his protest that he’s not a hero is to build-up his moral. Her default mode is caring about other people.

This says to me that Rose is an FJ type. These types use Extroverted Feeling (Fe) to make decisions. For an introverted type, it’s their co-pilot process. This process makes decisions based on what’s best for the group and how something will make others feel. It’s really good at building connection. So we see Rose stunning Finn at their first meeting for abandoning the group, then covering for him with Poe (an ESTP) because now its in the group’s best interest that they work together. This is also the side of her that connects and identifies with the kids at Canto Bight.

Saving What We Love

SJ types are the ones most likely to support established social traditions. You’ll find them in the Prequels as Jedi like Obi-Wan Kenobi (an ISFJ) and Mace Windu (an ESTJ). And when the Galaxy is in turmoil, they’re there fighting to bring a type of order that fits with what they believe the world should look like.

“That’s how we’re gonna win. Not fighting what we hate, saving what we love.” – Rose Tico

Rose’s line might be the most often quoted line from The Last Jedi. And it’s no wonder. This sentiment is quintessentially Star Wars. These stories have always been about characters fighting to save what they love. That desire drives every major narrative, from the misguided Anakin (ENTJ) turning to the Dark Side as he tried to save Padme (an ENFJ) to his son Luke (INFP) refusing to give up on Anakin’s redemption.

Reading Cobalt Squadron adds an extra layer to Rose’s line. For most of her life, “what we love” centered around her sister. Paige was the only family Rose had left and they were inseparable. The only direct order that Rose ever refused was to fly in a separate ship than her sister for a dangerous mission. She can’t do it because connection is everything to FJ types and Paige is Rose’s strongest connection.

Rose grows into a more confident individual during the course of the book, and gets to a point where she can fight for a larger “what we love” without relying on her sister’s constant presence guiding her. The first time they go on separate missions is the one where Paige dies (Admiral Holdo temporarily transferred Rose to the Ninka because she needed an engineer). And it’s that Rose — the one still reeling from her beloved sister’s death — who can remind Finn not to give up on the power of fighting for something good. 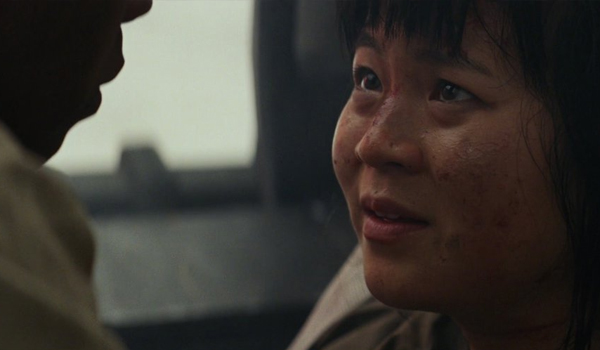 With her technical knowledge and difficulty with social interactions, it’s tempting to type Rose as an IxTx of some kind. But I’m going to say her technical skills have to do with a strong tertiary Introverted Thinking (Ti) paired with her lead Introverted Sensing (Si).

I’m constantly amazed by the problem-solving abilities of ISFJs I know. They don’t brainstorm and experiment with “what if …” like an xNTP would. Rather, they draw on a wealth of past experience and knowledge to make things work on a practical level. That’s part of what Si is all about — using memories of past experiences to interact with the present. Necessity (not curiosity) is the mother of their inventions. And this is what we see from Rose. There’s no hint that she’s inventing just for the sake of invention. See sees a need and comes up with a solution. It’s SJ practicality blended with Ti’s inventive logic.

In the film, Finn’s comment “they can track us through light speed” prompts Rose to go into problem solving mode and come up with a solution. She’s a technician and an engineer. She knows ships and she can draw on that knowledge to find a workable solution. We also see this in the book Cobalt Squadron. Leia assigns Rose to critical missions because she’s so good at “coming up with make-shift solutions to technical problems.”

How a character behaves under stress is one of the best clues we can use to figure out their personality type. Stress typically sends people into a dominant-tertiary loop (Si-Ti for ISFJs) and/or triggers an eruption of their least-developed mental process (that Extroverted Intuition/Ne for ISFJs).

We see Rose react to stress with relentless logic (Ti) and a focus on the past (Si). She sets aside her grief to go with Finn to Canto Bight. She reacts to the situation at Canto Bight through the lens of her past. She gives up the necklace that matched her sister’s to further the mission. While she does tap-in to her co-pilot Fe to interact with the kids, she spends most of her time in “I’ve got to get this done” mode.

It’s in Cobalt Squadron that we really get to see how her inferior Ne shows up. ISxJ types tend to come across as being constantly worried because Ne deals with exploring future possibilities. Since it’s a blind-spot for ISxJ types, they’re uncomfortable with the idea of an uncertain future. We don’t see that in The Last Jedi so much, but in Cobalt Squadron we learn that Rose is dealing with constant fear (according to Naomi Quenk, this is not uncommon for ISTJs and ISFJs). Fear is as familiar to her as an old friend, but she hates living in a constant state of readiness for the next thing to go wrong. Part of the novel’s plot involves her learning how to face that fear, which means we don’t get to see it at much in The Last Jedi.

All Star Wars films and TV series are available to stream on Disney+. If you would like to purchase the books mentioned in this article, you can follow the links below. Please note that these are affiliate links which means that, at no additional cost to you, I will receive a commission if you click on the link and make a purchase.

This site uses Akismet to reduce spam. Learn how your comment data is processed.

“Who Is the One Who Will Condemn?”

Why Does the Bible Say to Pray for People in Authority?

Facing Any Challenge With Our Christian “Bat Belt”

To Each According to Their Need

God Chose You Even Knowing You’ll Mess Up